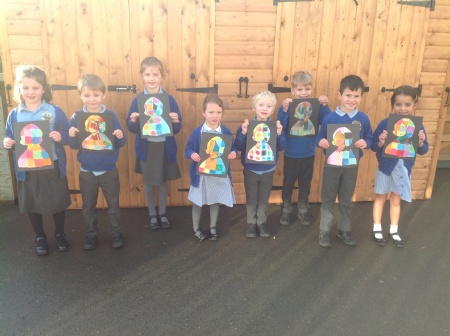 We've had a busy week back at school, with the excitement of Halloween and Bonfire Night bubbling away in the background, too!
The children have been learning their number bonds in maths, with Year 1s focusing on bonds to 10 and Year 2s revising bonds to 10, then using this knowledge to derive number bonds to 20 and 100 (in multiples of 10).
There's been a direct link between our Topic and English work as the children have been finding out about Mary Seacole, who was a businesswoman, world traveller, popular author and heroine of the Crimean War. Mary was a Jamaican woman born to a Scottish father and Jamaican mother.  Affectionately called 'Mother Seacole' by the British soldiers she tended during the war, Mary was largely forgotten after her death. However, her public recognition surged when she topped the list in a 2004 BBC survey to identify distinguished black Britons and newspapers quickly dubbed her the 'greatest black Briton'.  Following Black History Month, it seems only fitting that the children learn about her life and achievements alongside those of her peer, Florence Nightingale.
The week started with the children taking on the role of History Detectives in a number of activities designed to develop their investigative skills in which they found out a lot about Mary's life and achievements. They are now in the process of writing a recount about her in these lovely, little booklets which can be seen in some of our photos. We can't wait till they're finished!
In RE, the children enjoyed the Story of the Lost Sheep, which illustrates how important everyone is and what it is to belong to a group, regardless of whether it is big or small.
In Computing, we have been looking at the benefits of IT and the children were thinking about what IT was used at the supermarket.  They then worked in small groups to become a shopper, a scanner and the till to select a product, find a code and then add it all together.  They became real code crackers!
Finally, the children have finished their works of art on Florence Nightingale.  All of the pictures will be uploaded to the website but have a look at the photo for a little taster of the work they have done with the Y1s proudly showing their masterpieces.