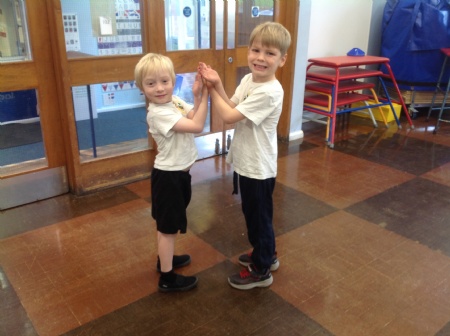 This week, we've started a fantastic new text called Mixed Up Fairy Tales which the children are absolutely loving! It's a very clever split-page book which allows you to switch between different stories. Did you know that Goldilocks was bossed around by two horrid stepsisters and fell asleep for a hundred years before being woken by a troll? Have you heard the story of Little Red Riding Hood, who got a scratch from a spinning wheel and turned into a beautiful swan? The children found it hilarious and are already looking forward to writing their own versions. On Wednesday, they had a go at acting out some of the parts and came up with some super ideas to help them remember the stories - as you can see in the photos.
In our Phonics sessions the Y1 children have been learning the 'oo' alternatives - ue, u_e, u and oul. They also learned the tricky words 'who' and 'again'.  Look out for these when you are out and about.
In maths, Year 1s have continued their work on adding objects and numbers up to ten. The Year 2s have been exploring related facts. For example, if you know that 4 + 3 = 7, what else do you know? 14 + 3 = 17, 40 + 30 = 70, and so on. They've also practised number bonds to 100 in multiples of 10.
Our RE lesson was all about Baptism and how it represents belonging in the Christian faith. We watched a short film in which a baby was baptised, and the vicar made a cross from paper to welcome the child into the family of the church. We were very impressed with the children's folding and tearing skills when they made their own crosses afterwards.
This week, we're sharing our gallery of Florence Nightingale portraits and have included a sneak preview among our photographs. We hope you'll enjoy having a look at the children's artwork; you'll see what a very creative and talented bunch they are!
Click here to view them....
We also wanted to share some pictures of the Year 1s who've been working on a Dance unit in PE. This has been based on the Jungle Book film and accompanied by some of its music. All of the children really impressed this week. They worked in a pair or small group to create a dance sequence and performed their ideas beautifully. Well done, one and all.