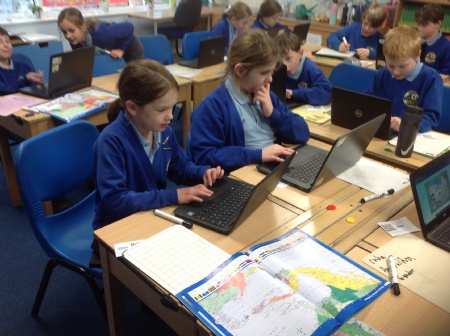 We've had another busy week in Hawthorn class!
In English, the children wrote instructions for the movable toy vehicles they've made from recyclable materials during DT lessons. As you'll see, they were very creative with their designs and completed the finishing touches by doing a little bit of decoupage with old magazines and PVA glue.  They wrote some super, clear instructions independently, and we're very proud of the progress they've all made with their writing this year.
We've continued our focus on money in maths and next we'll be moving on to word problems which will require the children to practise a number of mathematical skills.
In our topic lesson, the children found out how recycling is handled in the tiny village of Gokyo, Nepal which was recently visited by Matt Peacey. It's certainly very different to the way it is dealt with here in the UK!
One of the highlights of our week was Tuesday's RE lesson, when we were lucky enough to visit St Barbara's Church. We were so delighted with the children - they all behaved beautifully! Mrs Judith Hunter very kindly showed us around and explained about different features such as the pulpit, lectern and stained-glass windows. The children had a chance to explore for themselves and were particularly fascinated by the organ and the font. Afterwards, there was enough time to let off a bit of steam at the meadow - as the photographs show!
Wednesday was a sad one for Hawthorn Class as it was Mr Arkell's last day but we sent him off in style with a special picnic party in the afternoon. Fortunately, we'll be seeing him again as he's coming to help out with Sports Day next week.
And finally we have continued with our work in music.  The children are learning to play the descant recorder and we now know the notes B A and G so we were able to play a class version of Hot Cross Buns!