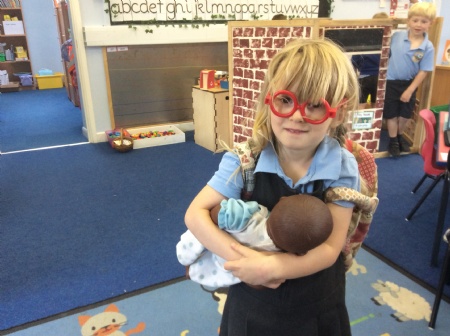 A mystery box filled with clues arrived in Holly Class on Monday! We excitedly unpacked it and used the clues to make predictions about the book that was tucked inside alongside all of the other objects. Together we worked out that the book was about a nurse from the past - Florence Nightingale. As the week has gone on, we have learnt more and more about Florence Nightingale's life and the amazing things she did. The Year 1 children have been writing lists of these amazing things in their literacy lessons, retelling the story of her life and creating a story map in preparation for writing a recount. Many of Reception children have also enjoyed retelling the story, often dressed up as a nurse or doctor. Holly Class has been the place to be this week if you have an injury or ailment, we are fully prepared to fix everyone up and help them to feel better!

When we were reading about Florence Nightingale and in the Year 1's history lessons, we have learnt that she was known as the lady with the lamp, and so some of the children have been busy making and crafting their own old fashioned lamps. It has been impressive to see some lovely creativity and independence when doing this and we are going to create a display with them in our classroom.

In maths lessons this week, the Reception children have met numberblock 1, 2 and 3 and have been subitising using this numbers. This means they have to say the number when they see it without counting each dot, we have had lots of fun with dice and making our own patterns. The Year 1 children have been working on number bonds to 5 as well as comparing objects and numbers using the greater than, less than and equal to signs. They have enjoyed imagining the symbols are crocodile mouths waiting to gobble up the bigger number!

In phonics our Year 1 children have been consolidating their knowledge of the different graphemes that can be used to write the 'ai' phoneme, they have learnt 6 in total and I have been very impressed with how hard they have worked to remember them all. They have also learnt that sometimes an -ed at the end of a word makes the 't' sound, like in looked and asked. The Reception children have leant another two phonemes this week - 'i' and 'n'. We are really concentrating on making a clear, pure sound when we say it and play lots of games using the actions that go along with each letter.

A real highlight of our week has been starting to learn a song called 'Do the Dough' for the Harvest Festival assembly next week. It has some great actions, we are excited to have it ready to share with you all!